The three-quarter scale prototype evolved from a concept entered into the GoFly challenge in California in early 2020. Its modular design is constructed in flat-packed form for kit assembly for the lowest outlay and on the shortest possible timescale.

Key to the outline is a four-pronged centre-section patented by a German technical university, but modified here with an airframe with four corners that support accommodation up top and a pair of skids beneath.

The current prototype addresses a need for a ground-effect vehicle that substitutes for boats and ATVs in niche markets. Nonetheless the design can be supplemented with additional motors to create an octocopter suitable for higher altitudes.

The scale prototype was flight-tested in December of 2021 can be seen in the video section. Meanwhile the airframe is being extended from 48" to 60" square and motors doubled in ouput so as to test the concept with an adult pilot.

The prototype pictured above and the backup test-type are available for viewing at the Helicopter Museum in Somerset and at 'Aeroventure' in South Yorkshire. 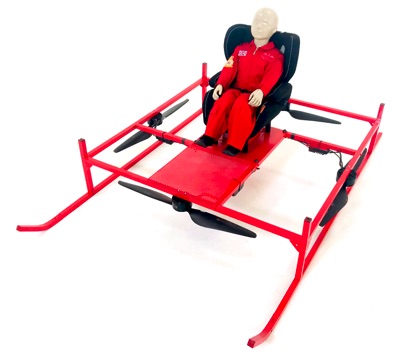