Originally conceived as a lookalike phone-booth based on a UK design, the first prototype entered the 'GoFly' challenge as a stand-up compartment with drones above and below.

As this exceeded the allowed dimensions, it would appear at the competition in California as a box for a passenger seated below a single quadcopter; the only UK team from over 800 entrants worldwide to appear at the event in February 2020.

Thereafter a revisred prototype was tested as an open-top 'bin' for an upright passenger, in which form it was tested at Llanbedr in Wales. After numerous rebuilds which provided ergonomic and build experience, the decision was made to persevere with the original outline.

The patented design is aimed at kit- builders and classified as experimental in the UK and ultralight in the US. A prototype is accordingly underway for testing at full scale with an adult dummy as 'proof-of-concept' intended for crowd-funding and advance deposits.

Intended for assembly in hours, with an airframe reduced to the minimum part-count and with few tools required for its construction, the product is an effort to stimulate a market for personal air vehicles beside flying taxis.

The final goal is conventional levels of failure protection that will stem from the eventual separation of the roles of upper and lower quadcopter assemblies, such that either is able to support controlled flight in the event of the other failing.

A guide to building the prrof-of-concept appears in sections entitled LOWER (quad), BOOTH and UPPER, or those three  modules that together make up the structural airframe. 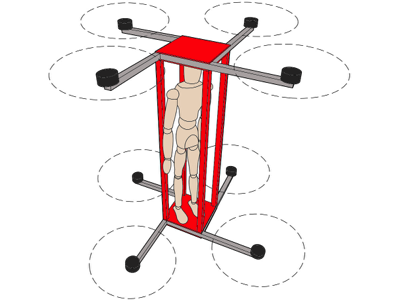