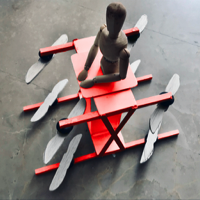 The original concept was drafted as a lookalike phone-booth based on the General Post Office's K8 design in the UK, the notion being that we were approaching a time when we may practically be 'teleported' to the desired destination. As such the design was entered to the GoFly competition, featuring a full-height booth suspended between quadcopters at foot and head height.

Subsequently the dimensions allowed within the competition meant  the effort had to be scaled down, and combined with the logistics of travel to the USA a two-third scale iteration would appear at the competition itself. This took the form of a box of reduced height where a passenger could be seated, as in the 'sedan chair' of times past... without the porters.

In order to field an airframe able to support an adult for the ongoing competition, however, a new approach was adopted where the flight compartment formed an open-topped box: more a type of flying wheelie-bin than phone-box.

The prototype will eventuially be extended to full-height so as to fulfil the original dream. At the same time each of its quadcopters will be wholly independent so that the airframe consist of three separate parts able to be joined as modules.